Sylvain Piron continues our conversation, discussing the current state of the tradFrench scene in Alsace.


The trad scene in Alsace is currently quite busy. I remember the 80s and 90s were much more quiet. There was a bal from time to time. Nowadays every week-end offers at least one opportunity to dance. Public has changed as well and more and more young people are interesting in dancing. The facility offered by Internet has helped the organisers to disseminate information with no cost. In the same way, music groups have increased in number and quality, in the 80s there were only a few groups in Alsace. Now, Accrofolk has listed around 30 groups. This has been the same in all Fance.


Until end of 90s people interested were mainly those coming from the May 68 movement. A big difference since the 2000s is the involvement of young people in this music. Festivals have always been a big France, but they have increased a lot for the same reasons of growing interest.

There has been a movement towards multi-accordéon groups (see Pignol/Milleret, or Accordéon Samurai). Recently Piron joined with Raymond Frank, Flavien DiCinto, and Cédric Martin to form such a quartet.

In fact, we formed a 4-accordion group is just an idea we had with Cedric-Flavien, the 2 youngs, and Raymond-Sylvain, the two olds. The idea raised one day we were joking and playing together. In fact we noticed that young people have a tendency to play fast and punchy while older ones tend to calm and balance the tempi. We thought we could form a group where we play and joke about these differences. Here is a video of the group in action:

Of course, I know Piron best as a teacher, and others have talked about the guidance he's given. He's not entirely comfortable with that.

I do not feel like an accordion teacher. I just give advice to beginners and take action to encourage them, but I miss two major qualities for a teacher: pedagogy and technicality. My accordion technique is not to be imitated because I have a lot of bad habits. Again it is the sound which interests me, not the way you produce it. Nevertheless, I like to gather people for playing together and share that music.

What did Piron think when this American aficionado -- that's me -- e-mailed him back in 1998? 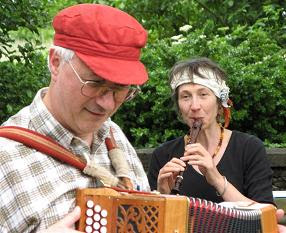 I am very proud when you say I was your teacher, but I feel a bit usurping because you where actually your own teacher, I just gave my opinion on what I heard and felt from from your recordings. When you showed up in 1998, I was very happy that my small music home page was something interesting for at lest one American! Thanks to you, I discovered later that a lot of American people where involved in these European traditional musics and that through that practice I had a lot of potential friends in the States.

We very often think here that Americans are only fascinated by themselves and their own existence and way of life. The fact that a young guy, lost somewhere in Maine, was attracted by my music was really a great pleasure and surprise in the same time, a sort of miracle thanks to the web! I am a bit joking but not far from reality of my feelings at that time.

What does Piron think of the future of tradFrench music?

About future of trad French music, I would like it to remain a practice linked to dance more than to market! That means to keep the spirit of it away from commercial purposes. On one hand it is fair that professional musicians can live decently from their art but on the other I do not wish that this music become fashionable and loses its roots and fundamental role: to make people experience the great value of sharing dances, songs and musics.