(Thanks to my colleagues at Melodeon.net -- Chris Ryall, Guy, and Quebecois et many cetera -- for help on this. Any corrections would be welcome.)
Accordionist (and multi-instrumentalist) Frédéric Paris and La Chavannée, the organization he’s associated with, have been a huge influence on me since I first discovered their cassette tapes at the Button Box around 1998 (when I bought my first accordion, the Hohner Corso). Forgive me, please, if I seem to lapse into hagiography. This is literally life changing stuff for me. I would not be an accordionist without them.  An incalculably positive impact on my quality of life. 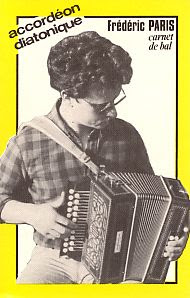 The first Paris recording I heard was Carnet de Bal, put out by the Agence des Musiques des Territoires d’Auvergne, or AMTA. It was a cassette tape featuring traditional tunes and Paris originals that, essentially, taught you how it was done. Simple arrangements that were fluid, effortless, precise, clear and ... I don’t know ... happy-making! This tape absolutely captured my imagination, and in the Dark Age of Irony that was the late 1990s, Carnet de Bal was a dose of joyful, earnest ease. One of the first tunes I ever learned on accordion was "La Marianne," the opening waltz on this tape. (This waltz was also the "tune of the month" on Melodeon.net in January.)


On my next trip to the Button Box, I picked up more AMTA cassettes (every one of which has since expired) and a tune book, Cahier de Repertoire, which had dots and accordion tab for every piece in Carnet and Paris’ other accordion focused CD, Rue de L’oiseau, which I would acquire some months later. Both of these recordings are, now, quite difficult to find, though Rue can be found here.
There is a some Frédéric Paris more easily available (it's just as easy to order from Amazon France as any other). He and his wife, Eveline, did two discs of French children’s music, Belle Pomme D’or and Petite Alouette (also on iTunes and emusic). These are charming and not at all the sort of processed children’s music you hear in the United States. He did a duet with hurdy gurdy-ist Gilles Chabenat called De L'eau Et Des Amandes (subtitled, “Traditional French Music Today”), comprised of originals that match the best aspects of tradFrance with modern harmonies and rhythms. Paris plays solely clarinet on this. For an accordionist, that might seem disappointing, but it’s just that good. This disc is out of print, but you can stream it here. A lot of its material shows up on Live en Flanders, which has Paris and Chabenat joined by Flemish musicians Wim Claeys (accordion) and Maartin Decombel (cittern). Most readily available is Paris’ work with La Chavannée, available at iTunes and Amazon download.
La Chavannée (founded, I believe, by Fred’s father Jacques Paris, aka Jackie), a traditional music group and cultural organization focusing on culture, music, and dance of the Bourbon region. They maintain a 19th century farm, host events, and recently built and launched a boat based on 19th century plans ... and they play unbelievable music. To see them on stage, a core of musicians with any number of friends, multiple accordions, hurdy gurdies, bag pipes, clarinets, trumpets ... below is a video of a recent concert. The man himself is on accordion. As far as I know, this is the only video of Paris playing accordion on the 'net. I'd love to be wrong about that.